A question of (consumer) confidence

There’s an irrefutably close correlation between a consumer’s confidence and the purchases they make – but can identifying the principal drivers of spend in the sector better empower retailers and suppliers to weather fluctuating customer optimism?
Home / Resources / Articles / 2018 / August

Happy customers mean prosperous business. There’s an irrefutably close correlation between a consumer’s confidence and the purchases they make, and factors both external and personal influence how people behave. In a new report developed exclusively for Gearing Media Group’s new trade directory, Connect, Paul Farley endeavours to put the relationship between consumer confidence and furniture sales in context, and identify the principal drivers of, and obstacles to, spend in the sector – and, by doing so, better empower retailers and suppliers to weather fluctuating customer optimism …

People will always need furniture. But their desire to buy new furniture is influenced by myriad factors, both positive and negative. For example, a wage increase might prompt an overhaul of a tired set of bedroom cabinet, while impending political change could persuade them to postpone the replacement of an ailing mattress.

Despite ongoing population growth – the Office for National Statistics (ONS) recorded YoY growth of 538,000 in 2017, to 65.6 million, the sharpest rise nearly 70 years – factors such as rising material and fuel prices, shrinking homes, increasingly fierce competition and a consumer that’s becoming more demanding with each passing year are putting UK furniture businesses under considerable pressure to seize their share of the market.

But before considering the impact of those factors within the seller’s control – such as product, pricing, online offer and promotional activities – on a consumer’s decision to buy, it’s crucial to understand the drivers that encourage them to spend or save in the first place.

GfK’s Consumer Confidence Barometer, conducted on behalf of the European Commission, surveys a representative selection of UK adults each month to establish consumers’ feelings and expectations.

One element of the measure is the Major Purchase Index (MPI), which is based on feedback to the following question: ‘In view of the general economic situation, do you think now is the right time for people to make major purchases such as furniture or electrical goods?’ By comparing the movement of the MPI within the wider Consumer Confidence Index over a five-year term, it is possible to identify how supposed demand for big-ticket items weighs up against more general consumer optimism.

Graph 1 demonstrates that throughout the five-year period spanning April 2013 to March 2018, the measures loosely mirror one another – as consumer confidence waxes and wanes, so too does willingness to shop for big-ticket items. 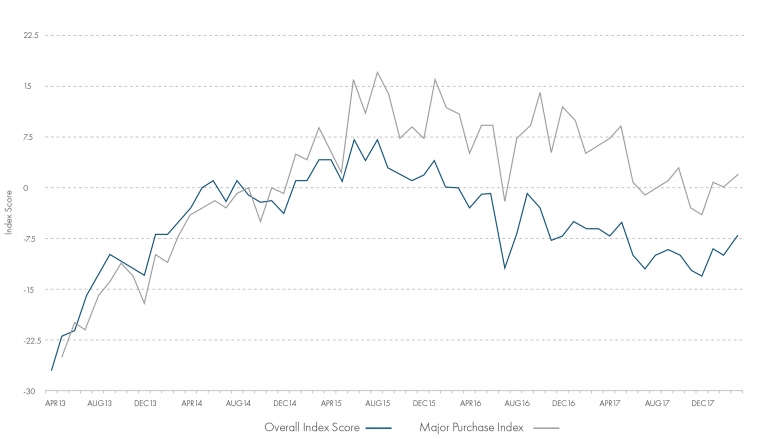 From March 2013 to August 2015 a general recovery from the financial crisis which hit in 2008 can be seen in both measures, but following this period there are several deviations, such as: in January 2016, where the MPI spikes considerably higher than the general index, perhaps indicating consumers keen to pick up bargains in the season’s sales despite a more generally downbeat mood; and in October 2016, the MPI high water mark following the referendum.

Furniture sales and the MPI

GfK’s MPI is not furniture-specific, but encompasses opinions on a multitude of considered purchases, from large home appliances and entertainment devices to holidays and cars. How does furniture fare within the bigger picture?

A study of the ONS’ monthly Retail Sales Index, which covers the total value of retail sales – offline and online – transacted by UK furniture and lighting stores, reveals a more general trend of growth over the period. Also, whatever the weather, on a month-by-month basis, there are general patterns reflecting the established purchasing cycle for furniture and furnishings – so the generalisation that furniture sales mirror consumer confidence is not entirely straightforward.

GfK’s Consumer Confidence Index exists in order to simplify a complex economic picture. Confidence – and the ensuing store or website footfall and transactions – is impacted by a plethora of macro- and micro-economic factors, political and social.

Retail has become a popular topic for the mainstream media, making the tribulations of furniture businesses more transparent than ever. Meanwhile, the stage of international politics is volatile, and is coupled with the onset of Brexit, an extreme transition of the UK’s own making.Yet while political crises may affect consumers on an emotional level, one should look closer to home to discover the real drivers behind consumer confidence.

They range from distress purchases to meet unexpected demand – such as the need for a sofabed for an elderly relative coming to visit – to promotional campaigns (offline and online) and credit facilities. Perhaps a customer has just bought a new home, which requires furnishing regardless of the immediate economic landscape – or they are content to wait for next opportunity to buy furniture at a discount.

Then there’s the nature of the product itself. As consumers tighten their belts, they tend to fall back to more affordable options that represent good value, while the more high-end, luxury goods suffer.

But there are are also buying patterns related to product type. As a necessary purchase, mattresses tend to endure better than dining furniture, and affordable upholstery will do well while home office ranges may not.

Ongoing uncertainty surrounding the Brexit negotiations (and the fall in the pound it precipitated) has created significant difficulty for furniture businesses, but this is just part of a bigger picture, and has at times been mitigated to a degree by positive factors encouraging big-ticket spend, such as low unemployment, wage growth and low interest rates.

Yet, with business rates fast becoming an unbearable overhead for many, coupled with growing competition from online pureplays and other big-ticket purchases, the furniture industry faces the likelihood of greater pressures.

The challenge facing the industry is clear – to minimise the harmful impact of fluctuating consumer confidence wherever possible, to seize opportunities when they arise, and to acknowledge changing consumer demand.

Furniture businesses cannot proof themselves against macro-economic crises or a customer’s personal circumstances, but there are safeguards that can offset the vagaries of fluctuating consumer confidence.

They can offer flexible credit options, and innovative, high quality products and services. They can deliver these honestly and consistently across every sales channel. They can ensure visibility through well-considered multichannel marketing, and work closely with their suppliers and customers to specify and select the most on-trend product.

Ideally, they will cultivate a product offer that covers as many bases as possible, and a pricing model that can flex to meet demand.

Whether times are good or bad, UK consumers look for good value – it may be reflected by a product’s quality, its pricing, or the manner in which it is delivered, but value is a constant that endures the tides of political change and personal circumstance. And, unlike consumer confidence, good value – and the trappings that surround it – is within the control of the supplier and retailer.

Paul Farley is the editor-in-chief of Furniture News. The full report on which this article is based, which includes detailed insight from leading furniture retailers and suppliers, can be found in Connect – The Furniture Trade Directory. A copy of the printed directory – and, for a limited time, VIP membership of the online Connect platform and a free 12-month subscription to Furniture News magazine – is currently available for just £95. Call 07493 391962 or email subscriptions@gearingmediagroup.com to take advantage of this offer.