Given the turbulence experienced by the sector last March, the following figures are compared with 2019 (pre-pandemic) – so now year-on-two-years (Yo2Y), rather than year-on-year (YoY).

UK retail sales increased 8.4% on a LFL basis from March 2019, when they had decreased 1.1% from the preceding year.

Online non-food sales increased by 94.0% Yo2Y, against a growth of 3.0% in March 2019. The non-food online penetration rate increased from 43.3% in March 2020 to 58.0% this March. The monitor's furniture category saw the highest Yo2Y growth online in March, yet the weakest store sales, conceivably due to the closures impacting non-essential retail.

BRC chief executive Helen Dickinson OBE says: “As we pass the one-year anniversary of the first lockdown, the retail industry has generally remained strong, despite numerous challenges. 2020 was a year like no other, with panic buying followed by a sharp decline in consumer spend, and then the first national lockdown which resulted in erratic retail sales. This makes a direct comparison challenging, so for a truer indication of where the industry stands, we changed our YoY comparisons for a two-year, pre-pandemic comparison period (Yo2Y).

"March 2021 saw an +8.3% increase in spending compared to March 2019, which was largely driven by grocery spending. However, the majority of categories remain in decline, and fashion and footwear remain the hardest hit. Meanwhile, with many stores still closed, online purchases reached the highest on record, particularly for TVs, gaming consoles and laptops.

“Despite some product ranges trading well, the next six months will be make or break for many retailers. Over the past three lockdowns, non-food retail stores have lost £30b, so many retailers will be relying on growing consumer confidence and a return to town and city centres to fuel their recovery. Retail businesses have spent hundreds of millions making their stores Covid-secure, so customers can feel safe and confident whilst shopping. We remind people to be considerate and respectful of other shoppers and hard-working retail staff so we can all safely enjoy our nation’s return to its stores.” 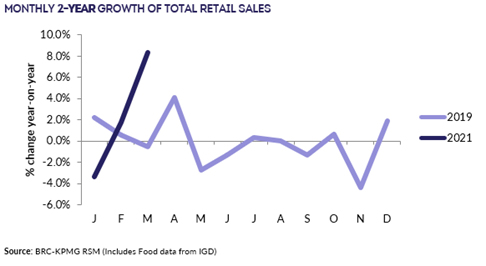 Paul Martin, UK head of retail, KPMG, adds: “One year on from our first national lockdown, the retail sector has changed dramatically, but remains remarkably resilient. March last year was a real anomaly and unlike anything we have seen before, with queues of consumers panic-buying items and images of empty shelves across our media.

"Whilst a direct comparison of March 2021 with the previous year is therefore difficult, comparing retail sales of March 2021 to March 2019 reveals total sales have grown by +8.3%, despite the challenges of the last 12 months. In that context, last month saw historic growth rates in online sales, with some categories like men’s and children’s clothing and furniture reaching triple digits. This is testament to how retailers, many of which have spent much of the last year with their doors closed, have embraced trading through lockdown via digital platforms.

“As we enter the next stage of the Government’s roadmap to recovery this month, high streets across the country will be hoping that pent-up demand from consumers will be released and cash registers will start to ring again. Government support packages will provide some relief to struggling retailers until after the summer, but conditions will continue to be incredibly challenging as they face thinner margins and rising costs. All hopes of a strong recovery now rest on consumers feeling more confident to move away from their homes and hitting the high street to browse the stores that have been out of bounds for months.”

Furniture News is a leading publication for the interiors sector featuring coverage of the latest contemporary furniture trends and the furnishings trade in the UK and overseas.