Out of Hours: The movie producer

Working in the furniture industry can be incredibly demanding, yet many members of the trade find the time to pursue noteworthy avenues alongside the day job. In Out of Hours, we discover what some of the industry’s more colourful characters get up to in their spare time …

My name is Steve Mosley, and I’m the MD of Besp-Oak Furniture, a supplier of furniture, accessories, lighting and giftware

Out of hours, I run my own movie company, Mosley Studios. It sounds a bit glam, but it’s located together with my new furniture showroom.

I became involved in this because after spending a long period in the Army, my main hobby became collecting military vehicles and aircraft. There’s quite a collection now, from WW2 vehicles to more recent. My favourites are the iconic Willys jeep from WW2 and the Harrier Jump Jet from the Falklands.

A couple of years ago I was offered the opportunity to provide some of them for a movie, and I enjoyed it so much that I set up my own movie company.

It asks that I commit to a lot of organising and unglamorous jobs – but if you really enjoy doing something, then it doesn’t matter about the hours, or even how much you earn.  I work with a great director [Tom Paton] and a great team, which leaves lots of time for my day job.

I’m most proud of our first movie, Stairs. It’s just coming out of post-production, and will be released this summer. It’s only a low-budget movie, but it is feature length, and we did manage to get some great actors, including [Coronation Street’s] Shayne Ward. The director, Tom Paton, is a young, up-and-coming guy with a great imagination.

We’re hoping it gets a slot at the Cannes film festival, and expect it to sell quite quickly to a streaming site (like Netflix). 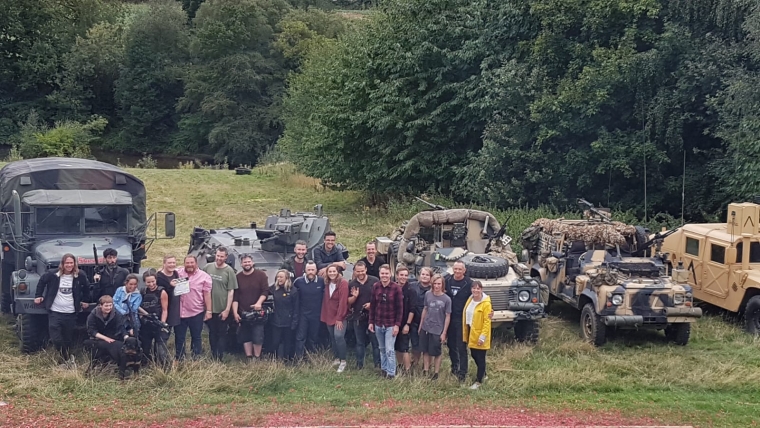 Steve on set with the Stairs crew

Ten years down the line, I see myself making at least two or three movies a year. In the short term, we start filming our next movie, Infexion, in June – it’s a pretty scary thriller about the UK struggling after Brexit, with everyone getting infected after the release of a nerve agent in Salisbury …

“We start filming our next movie, Infexion, in June – it’s a pretty scary thriller about the UK struggling after Brexit, with everyone getting infected after the release of a nerve agent in Salisbury”

I have learned that there are massive changes taking place in the furniture supply and retail industry, and businesses have to adapt to the way the consumer wants to purchase – and it’s the same for how they view entertainment, with established TV giants and movie studios losing out to streaming sites.

You might not know this, but I knew nothing about the film world at the outset – but that was probably a good thing. To me, it’s just another business, so I looked at it as a complete outsider. I could see opportunities that others maybe couldn’t. It’s no different to when I started out in the oak business 11 years ago, when no-one else was doing it properly!

If you want to know more, you can watch a short film outlining the making of Stairs here. Meanwhile, any customers visiting our showroom this June will be more than welcome on the latest film set!

Furniture News is a leading publication for the interiors sector featuring coverage of the latest furniture designers and the furnishings trade in the UK and overseas.